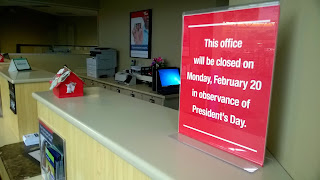 Presidents Day is both a federal holiday, and for most banks, a bank holiday.

What’s for sale on Presidents Day?
The late night shows all joke that this time of the year is a best time to get a new mattress, home appliance or bed (mattress), which doesn’t seem far from the truth seeing the ads on TV or online. Other sales include good deals on winter clothing as the season is coming to an end (and in some stores swimwear, such as bikinis are seen). But, actually it seems almost anything is up for grabs as a sale item. Stores of all categories have sales just to be able to jump on the sales bandwagon.


See this news story one various sales that can take place
during this 3 day holiday weekend.

So, What is Celebrated On Presidents Day?
School children may have special lessons on Washington or Lincoln around this time of the year. Some younger students may also learn about American money and coins to correlate which Presidents are on which kinds of money. If Presidents Day is seen as a day to celebrate any or all Presidents, then lessons may focus on the great deeds of any President.

Adults really don’t celebrate Presidents Day in my experience. I am also not familiar with community parades, flag hoisting or any other public celebration or commemoration (however, if your area of the US does hold a public gathering, do let us know in the comments below).

Is it a Day Off Work (or School)?
While President’s Day (officially known as Washington’s Birthday) is a Federal Holiday, so government offices, schools and post offices have the day off, most office-going people do have to go to work. Additionally, many schools end up having the whole week off. This week may be known as ‘mid-winter break.’


What is open or closed on Presidents Day?
Though we know schools are closed, government offices are closed and most banks are closed, it is up to the discretion of each business or entity to remain open, have abbreviated hours or close. In some areas public services like buses or garbage pick up may be halted. Watch your local NBC, CBS or NBC channel to know more about your local area, to see updates like in this video from KHON, a FOX affiliate in Hawai’i.

Is Mid-Winter Break the Same as Spring Break?
No. These two weeks off are very different. While mid-winter break is typically for schools (Kindergarten through 12th grade), Spring Break is both for school and college students. Spring break tends to fall anytime between late February and mid April depending on the academic calendar and area of the country. A majority of spring break week-long holidays tend to fall during Easter time.

Small Talk for Presidents Day
There really is no greeting or wish for this day. As far as small talk at work, people may talk about:

Note, both talking about children and cost of things are two sensitive small talk topics in the U.S. office. Typically, these topics may be bought up indirectly until we get to know a person.


Note: It’s still pretty cold throughout the US during February, as we can see this snow storm being reported from Ohio.
Photos in this post taken by Jennifer Kumar.