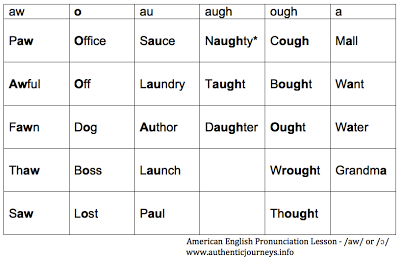 Whichever way you spell it – o, au, aw, augh, ough, or a, that awful ‘aw’ sound in American English is a tough “nut to crack.”


To me, this sound seems to be one of the most challenging sounds to make, learn, and use, simply because it does have so many spellings. And, not in all cases does ‘o’ sound like /ɔ/ or /aw/.

To take a step back, I am using the symbols /aw/ and /ɔ/ to represent this sound. The symbol /aw/ is easily recognizable as this symbol is made up of actual letters, and is used to help people pronounce words correctly in online dictionaries such as dictionary.com. The symbol /ɔ/ however, does look even a bit alien as it looks like the alphabet ‘c’ written backwards. But, it is actually the symbol used in the International Phonetic Alphabet (IPA) to symbolize this sound. I tell my students that the IPA is like an alphabet used to write any language phonetically. For instance, we may use the Roman, Devanagri, or Malayalam scripts in our local areas, but internationally, the IPA can be used to represent sounds in any language and standardize the alphabet (so to speak).

Tips on making this sound:

Examples (the letters in bold get the /aw/ or /ɔ/ sound):

Here’s a video to help you practice.

*Take note that Shawn and Sean are pronounced the same way, though they are spelled differently. It is pronounced as ‘sh- aw –n’.

*The “l” in “Walker” and also in “walk” is silent. The words “walk” and “wok” are pronounced the same in American English.

Incidentally, the ‘au’ in ‘Authentic Journeys’ also has the /aw/ or /ɔ/ sound!

Cultural references:
The sound ‘aw’ exaggerated as ‘aaaaww’ is used when someone thinks someone or something is cute or adorable. For instance, ‘Aaawww, that puppy is so cute.’ Or ‘Awwwww, your baby is adorable.’

Listen to how ‘Long’ is pronounced – slow, medium, fast:
(Notice how even when pronounced fast, the ‘aw’ sound is still emphasized.)

Jennifer’s tutorial on how to pronounce “modify” and “modification” with common pronunciation errors discussed and fixed.

Related posts:
Synonyms for Horrible (including ‘awful’)
How to Pronounce American English Sounds V and W

Chris Sufi is a freelance editor who lives in Bangalore, India.