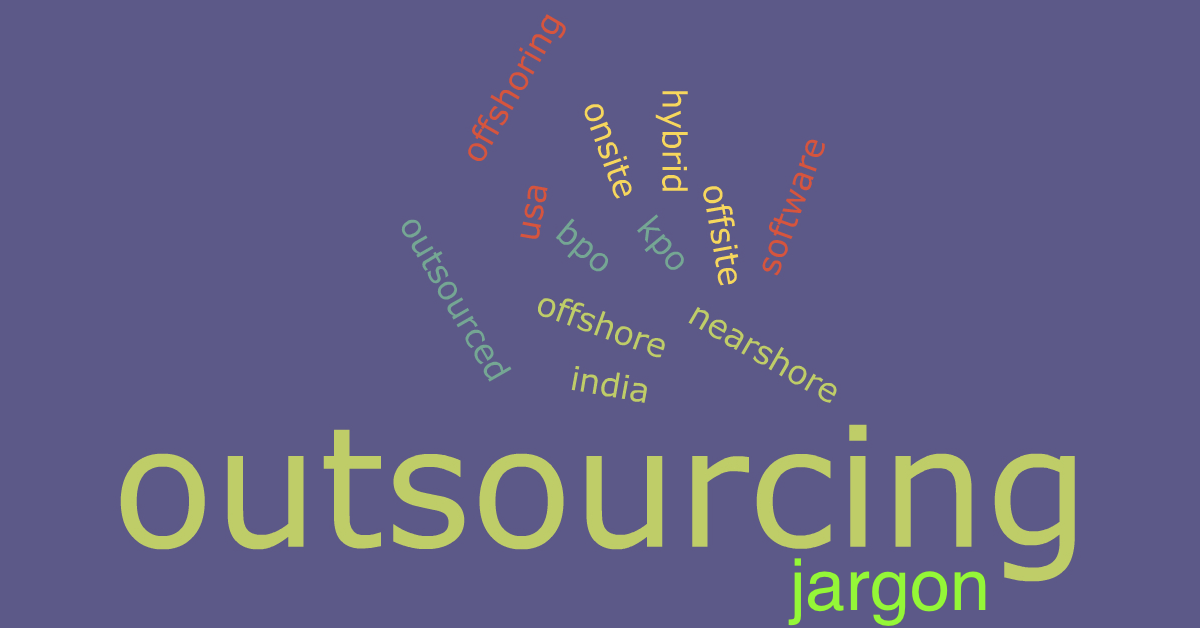 Like each area of the world has its own jargon, slang, idioms and “in-words,” so does every industry. When we find peculiar words or slang in a company, however, that’s when we call it ‘professional jargon.’ As Authentic Journeys works with many professionals in outsourced teams, this article will introduce you to some of the key terms used in related professional discussions.

Listen to the author below in a podcast/video sharing her thoughts on the differences between Outsourcing, Nearshoring and Offshoring. Read below for more.

See our program to help your offshore teamwork more effectively on a virtual team.

In a nutshell, outsourcing is a process whereby a company is unable to complete it’s work in-house, so they hire external consultants or companies to complete this work for them (or with them).

Why Does Outsourcing Happen?
To piggy back the above definition, outsourcing happens when a company doesn’t have all the resources to complete particular jobs, tasks or projects and hires outside companies or consultants.

Where Do Companies Outsource to?
Many people in the US believe that most of the work now a days is outsourced to India. Many people forget about China and the many other countries that provide low-cost labor to manufacture the goods Americans use. These workers are also outsourced workers.

Because of this, most Americans believe outsourcing only happens when jobs leave the US. While a majority of outsourcing can be attributed to this (depending on the industry), there are many cases of outsourcing that happen domestically within the US. A few examples are:

What are the Categories of Outsourcing?
With all the talk of outsourcing to India, most people think of IT outsourcing, and it stops there. In fact, there are other varieties of outsourcing as well, as listed below:

Business Process Outsourcing (BPO)
BPOs typically are focused on human resource or labor-intensive operations. This can also be done domestically or internationally. Many call centers and data entry warehouses fall under this category of outsourcing.

Knowledge Process Outsourcing (KPO)
KPOs are formed when a company hires externally to complete “thought-intensive” tasks or projects, such as research or analytics.

IT Outsourcing
The most familiar type of outsourcing happens when a company hires an external vendor to manage and maintain their electronics including computers, phones, and the company network in general. Other aspects of maintenance including handling complaints (tickets) and fixing the problems (bugs) are also done by an external company.

Software Development Outsourcing
This is perhaps the most commonly heard form of outsourcing. Here, the application or software development and maintenance activities are assigned to another company. This form of outsourcing has caused a lot of concern because it takes away many of the high-paying jobs from the core company.

Offshoring
While outsourcing can transfer jobs domestically or internationally, offshoring only transfers jobs abroad- or outside of the country of origin (ideally a country not bordering the country of origin). In pure offshoring jobs, the company sets up a satellite office in another country, sends a few key management employees from the domestic side, and hires a majority of domestic staff to undertake the work. In this case, pay, time schedules, holidays, benefits, training and resources are allocated by the parent company and not an outside agency.

Outsourcing Offshoring
When jobs are outsourced away from the original office base and in another country, this is called outsourcing offshoring. In this case, the majority jobs are being handled off shore (abroad) and are being outsourced to foreigners (but recruitment is not done by an outside agency or contractor).

Nearshoring
Nearshoring is a type of outsourcing where the work is given to teams in neighboring or bordering countries. For instance, an example of nearshoring happened in the 1980s when many factory jobs were shifted from the US to Mexico.

Summing it up
In all cases, cross-cultural training is a must for successful projects. In the case of offshoring project, the advantage is that direct hires are made aware of the company philosophy, mission, values, strategy and company culture during the transition or new employee training. This can expose the workers abroad to the company culture, but it won’t fully expose the newcomers to aspects of cross-cultural communication (in English), non-verbal communication, soft-skills, cross-cultural phone and e-mail etiquette, and thought process integral to the Western styles of work. If you operate or work on the above-mentioned teams and want to explore learning and coaching options for your team, check out some of our programs.