If you have Indian colleagues who celebrate Pongal or are from Tamil Nadu and observe this holiday in India or abroad, this article will offer some facts about the Pongal festival in addition to conversation starters with your Indian colleagues.

When is Pongal?
Pongal usually falls every year on January 14 (though in 2022, 2023, and 2024, it is scheduled to happen on Jan. 15). This is equal to the Tamil Calendar date of Thai 1. More about the Tamil Calendar here. While people who live in Tamil Nadu have one or more days off of work or school for Pongal celebrations, NRIs in the US tend to celebrate Pongal on the weekend before or after Pongal if it falls on a weekday.

How many days is Pongal?
Pongal is four days- each day has a different significance. However, in cities Pongal is generally only celebrated on the first day (usually January 14), where as in villages it is up to four days.

What days do my colleagues in India get off for Pongal?
The main Pongal day is Thai Pongal (the second day of Pongal). Thai Pongal may be the day office goers get off if they only get one day off for the holiday.
Keep in mind that while Thai Pongal is the main holiday that most companies could have as a paid holiday (check your company’s official holiday listing), colleagues with children may take off more days as children (and government employees) tend to have leave on all four Pongal days. And, in some cases, when Pongal falls on particular weekdays, the government may issue a notice allowing more days off to aid in families traveling to their native place for Pongal, as is the case in 2019. Read more here.


Is Pongal only in Tamil Nadu?
Yes, Pongal is only in Tamil Nadu. Other states have holidays during this time, such as Sankranti, Makara Jyoti, and the Kite festival. Pongal is the only harvest festival, where as the others are not celebrated for harvest reasons. Other parts of India have their harvest festivals at different times of the year. Keep in mind, though if you have team members in India from Tamil Nadu but living outside the state, they may observe or even take days off to travel to their native place in Tamil Nadu to celebrate.


What is celebrated on the different days of Pongal?
Bhogi, the first day which is the last day of Mazhagi madam (month) is used for cleaning and preparing the house and grounds for the festival.

Thai Pongal is the day most people celebrate Pongal, especially for those only observing it on one day. This day falls on Tamil month Thai day 1. This is the day for harvesting new rice and making Pongal (a dish).


Maatu Pongal is the day celebrated and dedicated to bovines/cows (maatu). Families will clean and decorate their cows in the village. In only selected villages, people prep bulls for bull fighting and bull racing. I did not experience this in the village where I celebrated Pongal.


Kaanum Pongal/Thiruvalluvar Day is dedicated to visiting family in other villages or going to the family temple.( Kaanum means ‘we see’ in Tamil.) Thiruvalluvar is a famous poet in Tamil history. Some people dedicated this day to him, reading his and other poetry and Tamil literature.

What does Pongal mean?
In Tamil, Pongal means ‘boiling over’ (English translation) it is also the name of the main menu item eaten.

What is Pongal –the food item?
Pongal is freshly harvested rice with moong dhal boiled to a consistency of porridge. It is made both salty and sweet. When it’s made salty/savory – salt, mild spices and ghee are added (known as ven pongal – ven means white). Sweet pongal, known as chakkara pongal, is boiled with jaggery (raw brown sugar), raisins, nuts and milk. More menu items eaten for pongal here. 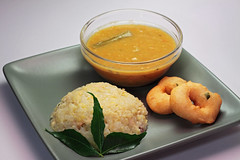 How is Pongal eaten?
Ven pongal is eaten with a side of sambar (stew with vegetables and lentils), and vada (lentil donuts) with a side of chutney (Indian salsa made of coconut, tomato or other vegetables). Sweet pongal, depending on the family tradition is actually eaten first or after the meal. Many Indian families I stayed with in Tamil Nadu would eat sweets first for special occasions. It was considered auspicious to put a bit of sweet dish (dessert) on the banana leaf of steel plate to eat before the actual meal items were placed on it.


Should I eat the curry leaves?
Many who are not used to eating South Indian food will find it strange that people who were raised eating this food will remove the peppercorns, ginger pieces and curry leaves before eating it. Other spices that are usually removed and not eaten could include green chilies, red chilies, and others. People will actually eat with their hand (in most cases) and remove these spices, they are eaten rarely by people. They are added while cooking for taste which absorbs in the food during cooking. It is not considered rude not to eat these spices. In fact, if you do eat them, others may look at you oddly because you would probably notice others not eating these items.

What do Americans say when the food is spicy?

How do people wish Pongal greetings to each other?
“Happy Pongal” is an easy way to greet with the mixture of English. A traditional way of wishing is “Pongal-o Pongal” which is often said right after the pongal has boiled on the stove. In the village, kids would dance and sing ‘Pongal-o Pongal’. Loosely translated this means ‘It’s boiling over, oh! It’s boiling over!”

Is Pongal associated with a religion?
Because Pongal is a harvest festival, anyone can celebrate the harvest, but I would venture to say Hindus are more apt to celebrate this festival than non-Hindus, especially when Indians of various religions move outside India.

Do people give each other gifts on this holiday?
For most holidays, the woman of the house would buy new dresses for each member of the family. People are not giving each other gifts. These new dresses would also not be wrapped and unwrapped, simply presented to god with a prayer then handed to the recipient for use. Also, on Pongal, it is important to clean the house on Bhogi and present the clean home with some new items. Some will buy new kitchen utensils, appliances or other household requirements. My friends actually had bought a new ceiling fan to install after Bhogi. 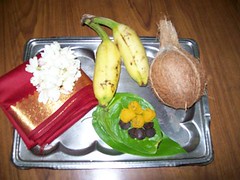 If I am invited for Pongal to someone’s house, should I bring something?
Bringing a food item may be a best bet, and something vegetarian.  Feel free to ask ahead of time. Often Indians would tell you not to bring anything. Then, ask what’s on the menu so far. Once they mention a few items (more menu items listed here), if you can cook or purchase something to take, that could be a good idea. If you do not have access to Indian food, taking fruits like bananas or apples is a good idea. Stay away from cookies and cakes as these have eggs and some people may not want to eat these items. If you want to take a non-food item, kitchen towels or small gadgets for household use may be a good thought (can openers, jar openers, spatulas, etc). When you leave the gathering you may be offered a small parting gift as a token of appreciation, called Thamboolam.  I often present my guests a small hand towel used for kitchen chores. More about thamboolam and parting gifts here.

Do people eat meat on Pongal?
Usually, no. Hindus that are non-vegetarians (meat-eaters), as my friends were in the village did not eat meat on Pongal. This includes the sambar- the stew broth is fully vegetarian as well. No eggs, meat or meat products were consumed on this day. Milk products such as ghee, yogurt and milk are eaten, however. Not sure if this is true for everyone, but I would venture to say it’s true for most people. So, while food tends to be vegetarian (no eggs), it is not vegan. 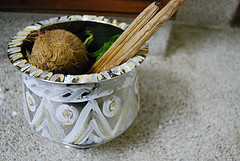 Are there any symbols associated with this holiday?
Ponga panai, or the earthen pot decorated and used for cooking pongal in. This pot is often decorated with turmeric leaves.
Household doorways are decorated with mango leaves and or [raw] coconut leaves.

Symbols of the sun are used for Surya Pongal and cows and bulls for Maatu Pongal.

People also use banana leaves for eating their meals on during Pongal, even in cities.
In addition to these items, “Turmeric tufts, koorai poo, Aavaram poo, banana leaves and mango leaves. Koorai poo is believed to keep evil away and so it is placed in front of houses.” (source)


Many of the symbols of this holiday are recycled in the art and temporary decorations people draw on the ground with rice flour called kolam (the image at the beginning of this post is of a woman creating a kolum). Pongal kolangal (kolams) are symmetrically drawn, colorful ground art made with colored rice flour and other items (maybe flowers, grains, etc). Though drawn as a welcome mat daily, for Pongal these ground decorations are specially created with a combination of Pongal symbols.

Have you ever celebrated Pongal?
Yes. I celebrated Pongal in India, twice. Once in an urban setting, and once in a village (as in the picture above). I have also celebrated Pongal in the US with other Tamil and Indian families and in my own home by hosting Pongal potluck parties. Below is a Pongal Kolam I made while living in the US. The yellow is the sun, the orange/rust colored lentil symbolizes the pongal pot, the tan grains on top of the pot is the pongal boiling out, the black line between the pots is sugarcane stalks, and the green on top is the sugarcane leaves. (The design was created in a Christmas tree stand for portability and easy clean-up!)  Click on photos to see a bigger size.

In this décor from 2007, I have included more symbols of Pongal. The floor decoration (kolam) is on a small portable blackboard.  The design is a pongal pot created with various dried beans, including kidney beans, black beans and green lentils. The pongal flowing out of the top is created with poha- or dried, pounded rice flakes. The green stalks to the sides are sugar cane. On the bottom, in toor dhal is written Pongal-o Pongal in Tamil script. Though not traditional in Tamil Nadu for Pongal, I have put up a bommai golu (Dolls display). Some Tamilians may do this for Navarathri (more here), but some Andhrites do put dolls display for Pongal, known as Sankranti in Andhra Pradesh. I coupled these two traditions together. In the décor I tried to add more Pongal symbols. In the pot on the floor is ‘wheat stalks’, on the slightly elevated shelf is a ceramic pot with crushed tissue paper resembling pongal pot, on fireplace mantle a collection of cow toys and statues, and bordering the fireplace are two bamboo rods resembling sugarcane stalks, tied together on top with green twine and with dangling green felt leaves to symbolize the mango leaves. I added in a few ethnically dressed dolls for special effect. The text on the photo says, “Pongal Asamsakal.” The word “asamsakal” is a Malayalam word meaning “wishes.” 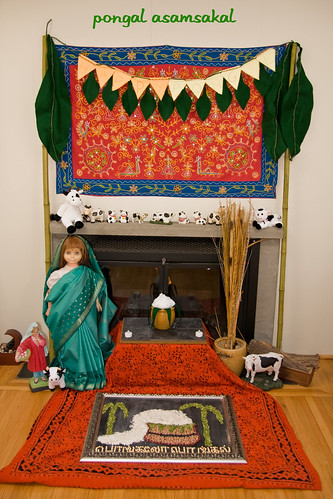 Pongal in the US with a Malayalam greeting

Thank you for spending your time on Authentic Journeys.  Jennifer Kumar is an ICF certified coach who has lived in southern India for 10 years. She is currently based in Salt Lake City, Utah. Contact her for coaching and leadership interventions for you or your team or your company.