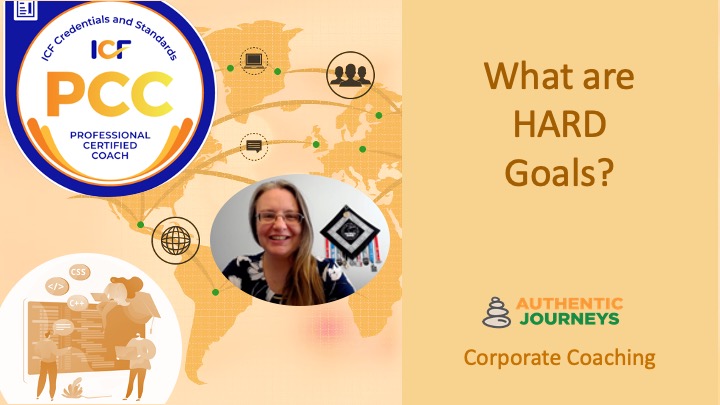 Are you looking for a different approach to setting and achieving your goals?

In this video, I’m going to discuss HARD goals as proposed by Mark Murphy in this 2014 book that I picked up and read in like two days, which is really incredible for me.

I’m Jennifer Kumar from Authentic Journeys. Welcome to this video on setting and achieving your goals using hard goals as presented by Mark Murphy. So I’m actually going to be presenting this in two parts, this first part is going to be about the expansion of what the HARD acronym actually stands for. And if you stick around for the second part of this video, which is going to be another video, I’m going to actually give you an example from the book with some additional strategies that I would use maybe to also coach someone through actually setting a hard goal.

So many people would have heard of SMART goals. Maybe you want to turn off the video now that you’ve heard me say that, but I’m only going to use that as a reference as a comparison, because I know that SMART goals were all the rage 10, 15, 20 years ago, and that rage and passion for that has really dwindled down almost to the extent that some people totally detest, that idea of SMART goals. Well, if you detest it, if you detest SMART goals, you might just like HARD goals. And I think this is a pretty cool concept. So I thought of sharing it with you.

So I’m going to just share the expansion first of HARD, and then the definitions or what each of the words actually mean in the context of goal setting.

Alright, so HARD luckily, spelled just like it shows up in the dictionary. H – A – R -D.

So heartfelt. What? Why? Why do we have heartfelt I mean, this is all about leadership and motivation in corporations?

Why do we put our feelings into it, of course, it’s been becoming trendy, to actually put our heart into our work, we hear all these phrases like be passionate about your work, do what you love, love what you do all of that, right. So that is nothing but being invested in what you do, because you really like it, and you’d love it. And if you like something and you love something, it’s mostly connected to your feelings, which is hopefully connected to your heart, not your head where we think but our heart where we feel. So you really want to be able to feel it, you want to be able to really attach some feeling to it and that tends to motivate you more, the more feeling you have invested in that.

Second is animated. As Mark says, “Our goal is so vividly described and presented that to not reach it leaves us wanting more.” Right. What does that mean? Well, later in the book, there’s a really popular example of talking about how the Wright brothers who flew the first plane probably had a higher probability of that happening because they visualized it all as they were going through the process. Or better yet, as this presupposes they probably visualized that even be before they started the process. And later in the book, there was also a statistic of like 47% of people from a certain study who actually claimed or mentioned that they visualized the outcome before starting to achieve a goal that they set, were more more likely to have achieved that goal or they actually achieved that they felt they were more likely to achieve that goal because they visualized it. And I’m gonna go more into how you can maybe do that in the second video of questions you can ask yourself coach yourself through.

Required is the third one. Is it really needed? This is the thinking part. Heartfelt is from the heart the feelings required is from the mind you’re thinking. So the previous goal setting method SMART, the R was realistic. A lot of people hated that word that was the one that many pointed out to me that they hate realistic. That’s not really something that I might need or it’s not pushing me further. It’s not pushing me out of my comfort zone because it’s realistic. It’s something I think I could really do. So required and then there’s difficult.

Difficult is something that we know will push us outside our comfort zone. So both the R in the D in hard are really challenging the R from SMART. Now of course there are other expansions of smart where R stands for other things besides realistic, but the version I learned many, many moons ago they are stood for realistic.

What have you taken away from this talk? What might you want to apply while setting your goals? Well stick around to the second part where I will share with you how to actually coach yourself to come up with a HARD goal. Stick around for that. See you in the next video.

Jennifer Kumar partners with your team to maximize their potential, increasing engagement and passion through innovative coaching and learning interventions. Get in touch with her to learn more.

HARD goals are an alternative to SMART Goals. In this video, I share what the expansion of this acronym is in addition to some strategies I have used to #coach teams through this type of goal-setting process. #goalsetting #teamcoaching #corporatecoaching