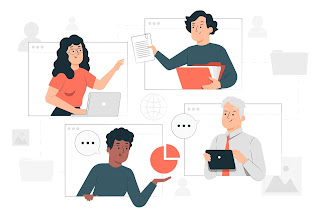 
One of the concerns some of those who work with Indians who are not familiar with India wonder is, “How fluent are Indians in English, and will they speak up during meetings?”
Teams I tend to work with receive feedback from stakeholders or internally on performance reviews around any of the following points:
While some of these points are certainly cultural (high power distance), some may find these points run contrary to working virtually as well as working on self-organizing teams (in the Agile Framework).

Based on my experience as an American who has been training teams in India for over 10 years, I would like to share some possible remedies you can try to overcome some of these communication and culture gaps.


4 Ideas To Speak Up During Virtual Meetings

Insist offshore Indian software teams to have meeting agendas that incorporate key players into the agenda. If an agenda is not an answer, try setting down some predictable formula that works for shorter meetings.


While an agenda can help keep things from going overtime, in some teams when agendas are first established, the head honcho is the only one talking, while the developers stay mum. While some of this can be attributed to the differences in management hierarchy in India, some can be resolved by insisting on an agenda or formula that calls out specific people to talk on specific agenda items or tasks that need to be completed during each sprint. This way each person on the India development team is heard. While hearing from everyone is a US cultural expectation, this is not always an expectation in India, so bear with the teams as they try to adapt their own strategies to please you.

Move to One-on-Ones
If group meetings do not work, try one-on-one meetings. While I know you have only so many hours in a day, and adding one-on-ones can sound tedious, the good news about one-on-ones is that they can be in shorter duration than full-length meetings. The one-on-one could be scheduled with only the person doing the task, not the entire team or the management. In some cases, I have seen with those weaker in English conversation start out with IM or chat meetings then work up to phone calls.

Use IM or Chat
Do you have only one question or a short message to deliver? Try IMing or slacking the person in question. Sometimes these short interactions could build rapport and build confidence to phone conversations. While sticking to work related questions may come by default, maybe having a short small talk conversation about the team member’s weekend or a recent holiday that passed can help to break the ice. Or, just ping your colleague to say “Hi” or “Good day.”

Talk in Plain English
This maybe the most tricky of all, because for this to happen the awareness and onus has to fall on onshore native speakers of English. Remember that while offshore team members have a wide range of fluency, it is still a good bet that even the most fluent may not always understand American idioms in conversation, and how to respond. In some cases, the idiomatic responses get lost in translation and can cost time or money in project work. In other cases, it just so happens that your offshore team are too busy trying to translate idioms in their head to their local language and back to English again to try to get the meaning, and are just at a loss for words. It’s important for onsite native English speakers to be aware of their word use and if normally talkative offshore team members are suddenly mum, take inventory of what was just said. Was an idiom or phrasal verb used? Something as ordinary as saying, “Looks like Ram is MIA.” could be answered with silence while the team tries to figure out what MIA means! As native speakers, it’s often challenging to identify when an idiom or phrasal verb is said, but after the first two or three times the silence is noticed, try again to repeat what was just said in different words (plain English). As idioms are quite poetic, it can be challenging, but this will help offshore understand easier.

Are you an American working with Canadians, Australians or British nationals? Don’t assume that they know American idioms or phrases! While some of the same phrases may cross borders, they may or may not have the same meaning. For example, I (an American) was once talking to my British counterpart who said, “That’s going straight to the skip.” I had no idea what skip meant as skip means a kind of hop in America which suddenly made no sense to me. I did speak up and ask what skip meant, and found out it meant ‘dump.’ But, as my British counterpart did not use the word ‘dump,’ we both had to use plain English to say, “the public place where garbage is thrown.”

Indian offshore teams may not always be so bold to ask about a particular word or phrase, so it may be up to you to be aware of corporate jargon, phrases and idioms to rephrase for clearer communication.

Jennifer Kumar, helps you to identify and resolve culture and communication problems on your global team. We can work together to improve your team’s workflow and day to day functioning.  Contact us for more information today.