Tips to Network at Conferences and Trade Shows

With over 20,000 attendees, almost 200 sponsors and probably another 100 speakers and panelists, the Silicon Slopes Tech Summit is ripe for networking. This is my second year in attendance. Amazingly I was able to recognize at least five people in the sea of humanity that I have met last year. Though there were some talks that I attended, the main reason I wanted to go was to learn about the local companies, sponsors and generally meet and get to know what people were up to. In that process, I spoke to representatives of over 30 companies in the sponsor area. I’d like to share some of the takeaways from this networking experience that may be useful to others looking to network and talk with people at large events like this.


Have a Game Plan
Though two days seems like a lot of time, I assure you it is not. Though I spoke with 30 companies, there are many I did not get a chance to for a variety of reasons. Here are some tips that I used that may be helpful to you when creating your “plan of attack.”

Prepare Your Networking Strategy With These Tips:

The sponsor area- a crowded and fantastic place!


Scan the QR Code for Authentic Journeys or Jennifer Kumar’s LinkedIn Profile here (please note you saw this blog, so I know where you are coming from!).
> 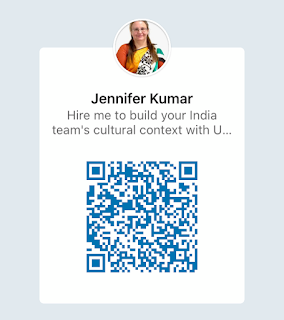 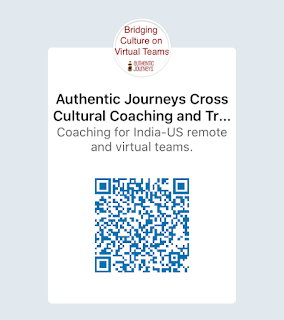 How I Started Conversations
This was actually my weak spot. Fortunately in most cases, the representative at the booth started the conversation with me. However, in other cases, I found it better to initiate the interaction. Though I was there representing Authentic Journeys, I decided not to make it obvious, so at first I started with the boring introduction,

“Good morning, I am Jennifer Kumar….I’m curious to know more about [company name].”

I’d build on this conversation by asking questions about their company and if they were from out of town, I’d ask them how they liked Salt Lake City, if it was their first time visiting here and if they’d get a chance to see anything outside of the conference (I did meet at least two out of state sponsors, one from Indiana and another from North Carolina). 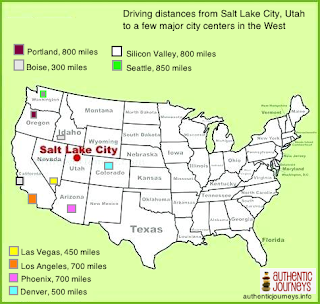 Very quickly this opening felt a bit ordinary or boring and dry, so I somehow came up with this:

Are you here today to recruit, educate or meet and greet?

I think I came up with this noticing that after talking to a few companies, these were the top three reasons most of the sponsors were there. This helped open the conversation with more ease and actually also interestingly allowed the person I was talking to to feel ‘more in charge’ of the conversation. However, at the same time, within a minute or so of talking, I could also steer the conversation to some of my interest in the discussion based on my research of the company or another topic they mentioned so far in our short discussion.

Ending the Conversation
Typically, after about 3 or 4 minutes, I’d feel it was time to wrap up the conversation and move on. In most cases, at this time is when we may exchange business cards or LinkedIn profiles, thank each other for their time and wish each other a good day. In most cases this was a natural progression, but of course there were times the conversation got cut short due to large crowds or the representative getting interrupted to take care of other matters.


In this one case, I did not even have to talk to a human!!
Say HELLO to CODE-E, the PWC robot!

Another creative way I found to end the conversation was to ask about the swag. Though some booths were giving out swag based on a spin of the wheel (as the blanket, above) or some kind of game, if the swag was not all distributed by say about 11am the second day, they may be willing to give it out without playing a game because they simply don’t want to carry it back! I ended up getting this NICE [InContact] t-shirt as one of the spoils of those victories (picture is below)!

Yes, I Had an Ulterior Motive
As I tend to work with companies with a US – India connection, I was there to really scope out companies who have a connection with India.

There are several born and bread Utah companies that do including: 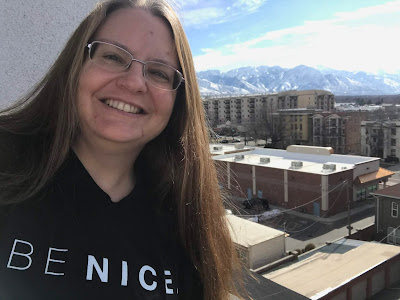 Note: It’s not always easy to find out this information from the company website. Other searches on Google helped me find out some of this information. Even then, I am not 100% confident about it. As per my understanding Utah companies may have branches in Pune, Mumbai, and Bangalore.


Zions Bancorporation does as well, but I am not clear if the connection is only through TCS as this article suggests. Though, I have met a few people in Salt Lake City that say their family who works in Zions Bank does work with a remote team in India. I haven’t figured out how to crack that corn yet!

Additonally, after the summit ended, there was a big announcement that Utah company Simplus is to be bought out by Infosys. I am not sure if they had an India connection or office before the buyout, but they do now!

There are some of the big players that do, too, such as Goldman Sachs, OC Tanner, 3M, PWC, EY, Deloitte, and Cisco (though all these were sponsors, I don’t think they all had booths there).

Networking and Meeting People Who Aren’t Sponsors
There are plenty of other opportunities to meet and greet others who are not sponsors. We can have a chance to meet with and take photos with the speakers (I was able to take a photo with Jeff Sutherland and Eric Trowbridge, which I will share in another post), we can meet other attendees during other talks where there is an element of interaction, while passing in the hall or restroom (yes, I actually met one very interesting person while washing my hands!), while eating lunch, while standing in the registration line, or virtually anywhere! It’s all up to your outgoing nature or being in the right place at the right time to strike up that amazing conversation!

I’m interested to hear your networking tips and secrets! I am a coach that helps you to network more effectively in conferences, seminars, and events as an attendee, speaker, or representative at the sponsor booth! Feel free to get in touch with us to see how we can help you!


Related Posts:
Learn about Authentic Journeys’ work in India with Global IT Teams
Prepare International Expats who come to Utah
Prepare teams in different countries to work with Utah teams in virtual environments
Encouraging Teams in India to Speak Up in Stand Ups and Team Meetings
Networking at the Doing Business with India Seminar in SLC