Let’s Learn About US Football and The Super Bowl

Small talk about sports is common in American workplaces. Today, I ask Matt Wade a few questions about [American] football and the Super Bowl, which will be on February 2, 2020 (the same day as Groundhog Day).

Who is playing?
Super Bowl 54- yet to be determined.


Where can I watch it in the U.S. and in India?
It will take place in Mercedes-Benz Stadium in Atlanta, Georgia. Few will go to the stadium to watch it as tickets are priced anywhere from $2,500 to over $4,000.


So, most of the people watch it at home, at a bar, a restaurant or outdoor venue.


Where can I watch the Super Bowl in India?
Watch it in India on Sony Six on Monday February 4th at 5am. Or try live streaming from a link here.


What is the Super Bowl?

The National Football League (NFC) championship game, played annually between the champions of the National and the American Football Conferences (AFC).  The NFL is the highest level of professional football in the United States, culminating a season that begins in September of the previous calendar year. The 2016 Super Bowl will be the 50th Super Bowl.


When is the Super Bowl?

The game is played annually on a Sunday as the final game of the NFL Playoffs. The game is currently played on the first Sunday in February.


Why is it called Super Bowl Sunday?
Because the Super Bowl is always played on a Sunday.


What teams usually play in the Super Bowl?
The champions of the National and the American Football Conferences (AFC & NFC)


Are there Super Bowl celebrations?
On Super Bowl Sunday, millions of people gather to watch the Super Bowl. Some such gatherings are known for the large amount of food that is consumed by attendees.


I have heard of tailgating. Is this related to football? Is it done on the Super Bowl, too?

Yes. Tailgating is a strong tradition among American football fans, both college and professional.

What is tailgating, exactly?
The term tailgating derives from the tailgate of a pickup truck. People used to park at games, put down the tailgate on their truck and use it as a table for food and drinks that would be consumed before entering the stadium for the game.  Now, tailgating is more sophisticated as people will drive motor homes, with BBQ grills, lawn chairs and other equipment in tow.


What kind of foods do people eat or drink at a football game?

Common foods are hamburgers and hot dogs, while soda and beer are the most popular drink selections.

How is football played? What are the rules?
See this post for video tutorials.


Is it expensive to go to a football game or the Super Bowl?
Because there are only eight home games and the demand is so high, ticket prices for football tend to be rather high. For the Super Bowl, since it is such a major corporate event, the prices are often too high for the regular fan.

When is football played?
The typical football season lasts for roughly 17 weeks, starting around the second week of September and ending in January, with the final game, the Super Bowl, being played on the first Sunday in February.
Other important games happen during homecoming (only for colleges, high schools and universities, not the NFL) and Thanksgiving weekend.
How can I make small talk about football or the Super Bowl with my US colleagues?
Good questions to ask would be:


Are there any idioms or phrases people used related to football? 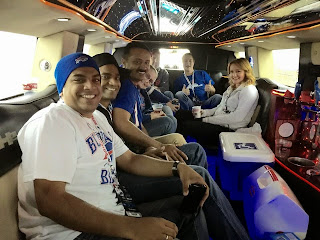 
Author, Matt Wade is a thought leader in academic and career planning, a product evangelist, and a vanguard of higher education’s progressive movement.


If you are preparing to move to the US as an international student or expat, take a look at our program on preparing for a successful transition to the US.


Related Posts:
Small Talk Made Easy
Transition from Small Talk to Business Talk
TV Channels in the US