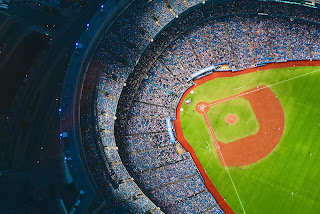 American Sports: What is Baseball?


As the weather in the United States warms in late May, baseball becomes a popular topic of conversation.  Summer and baseball are a perfect marriage.  So, if you are soon to engage an American in conversation, a timely subject would be baseball and the World Series.

1. What is the World Series?

2.  When is the World Series?
October of each year.

3.  Why is it called the World Series?

A name first coined by the Spalding (of athletic equipment fame) Baseball Guide, it was initially made in reference to the post-season game between Chicago and St. Louis in 1886.

Spaldings editor noted that since both teams were already “Champions of the United States” in their respective leagues, the winner of the post-season games would be “world” champions, hence the “World Championship Series”.

Spalding continued to refer to post-season games by this name, adding that as other nations embraced baseball, their winning teams would participate in the playoffs, turning the “World’s Championship Series” into a reality.

Although this never happened, the name remained in use, eventually settling on “the World Series”.

5.  Are there World Series celebrations?

Yes.  World Series champions traditionally celebrate in two ways.  The first is in the locker room immediately after winning.  Beer and champagne are poured over the heads of teammates in joyous revelry.  The second celebration occurs in the days that follow when a parade is held in the streets of the city from which the winning team resides.  The players, coaches, and management ride on floats and convertibles and wave to throngs of fans.

While tailgating is a common occurrence before games in other sports, it is not as popular with baseball fans.  This is because the sport of baseball is slower and more relaxed and offers fans plenty of opportunities to make small talk while in their seats inside the stadium. While sitting in one’s seat, a common sound is the murmur of conversation throughout the stadium.  Attending a baseball game is a very social event, whereas there is much more focus on the game when attending other sports.  Part of this has to do with the speed of the game and part of it has to do with the fact that baseball is played outdoors in the summer.

7.  What kinds of foods can I eat at a baseball game?

The most popular food eaten at baseball games is “ballpark franks” which are grilled hot dogs.  Giant soft pretzels are another popular item.  The most traditional, although not as popular today as it used to be, is peanuts in the shell.  Fans buy large bags of peanuts and, while watching the game, crack the shells open and work their way through the bag.  Sharing a bag of peanuts is also popular.

8.  How much does it cost to go to a baseball game or the World Series?

Because there are 162 regular season games and 81 home games, baseball ticket prices tend to be more reasonable than sports like football, basketball, and hockey.  A seat in the bleachers can be bought for as cheap as $15 while premium seats behind home plate run cost hundreds of dollars.  For the World Series, ticket prices for all seats are very high and often unaffordable for regular fans.

9.  How can I make small talk about baseball or the World Series with my US colleagues?


“How does your team’s pitching look this year?”
This is a popular question since pitchers are key to a team’s success and fans fret over their pitching staff.

“Who is your favorite player on your team?”

“If you could make a trade, who would you want and who would you be willing to give up for him?”
Talking trades in baseball is a popular tradition and often includes ridiculous trade ideas.  But it can definitely be a fun conversation.

“Do you think steroid users should be allowed in the Hall of Fame?”
The 1990’s and the first decade of the 2000’s brought with them a list of great players who also happened to use steroids.  Steroids are illegal in baseball, have since been removed for the most part from the game, and have left a stain on the game’s reputation.  Because of this, many people believe the great players from this era should not be in the Hall of Fame, which is the highest honor received after a player retires.

10.  Baseball idioms popular in common conversation
“Take my bat and ball and go home”
This typically means someone is quitting an activity and leaving others with no ability to continue on their own.

“That idea is straight out of left field”
Left field is an area on a baseball field that is far away from the action.  It means an idea is weird.

“He is playing hard ball”
Hardball is a nickname for baseball and this idiom means a person is being ruthless in a negotiation.

“He has a good batting average on these things”
A batting average is a gauge in which to determine how successful a baseball player is as a hitter. In business, it is used to describe the success rate of an employee.

Baseball is rich in tradition and its historically great teams are held in high regard in American society.  Teams like the New York Yankees, St Louis Cardinals, Boston Red Sox, Philadelphia Phillies, and Chicago Cubs have been around for a century or longer and not only have strong followings, but many championships under their belts.

12.  Is there anything else I should know about baseball or the World Series?

Author, Matt Wade, is a thought leader in academic and career planning, a product evangelist, and a vanguard of higher education’s progressive movement.

Related Posts:
About “American” Football and the Super Bowl
Basketball & March Madness
Small Talk Made Easy
Transition from Small Talk to Business Talk
TV Channels in the US