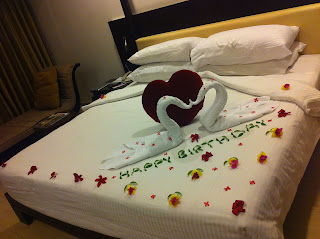 What Does ‘Turn Down’ Mean?

What does “turn down” mean? Today I heard someone say, “I was turned down some 40 times before I was hired at this company!”

I did not understand what “turned down” meant!  Help me understand this American English idiom!

This was said by a person who applied for 40 different positions at the same company in different parts of the US. Apparently, he loved that company so much he kept trying until he got it!

I heard this sentence in a speech recently, and thought it was a great example of an idiom that can be commonly and frequently used in corporate communication (as well as in ordinary speech). Let’s look at four definitions of this phrase and possible meanings.

Before looking at that, let’s keep in mind all the forms of the phrase ‘turn down’:

TURN DOWN: REJECT
“He was turned down 40 times before he was hired!”

The phrase ‘turn down’ and it’s forms can be used in terms of hiring or getting a job. This phrase can be used by job hunters, Human Resources (HR) managers, or anyone talking about someone not taking or accepting a job offer. So, in this case, turn down means “to reject something or to be rejected.” It can also be translated as not wanting or desiring something.

Other example sentences inside and outside of work:
1. She was turned down for the promotion. (Meaning: She did not get the promotion.)
2. I will be turning down the team leader role. (Meaning: I will not accept the role./I don’t want the role.)
3. He turns down every offer he is given! (He will not accept any offer!)
4. I’m surprised he turned down the job because he did so well in the interview! (I don’t know why he did not accept the job when he obviously prepared well for the interview.)
4. She turned down a man who asked her out on a date. (She will not go on a date with any man!/She doesn’t want to date anyone.)
5. He keeps on turning down every offer on his house as he wants more money! (He says no to every offer on his house because it’s not enough money.)

TURN DOWN: REDUCE VOLUME
The use of the phrase in this way really only has one meaning- to reduce the volume. Some may use the expanded phrase ‘turn down the volume,’ as well. The opposite of this can also be used, ‘turn up,’ or increase the volume. 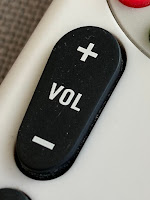 Note that the phrases ‘turn up’ and ‘turn down’ cannot be used to ask someone to turn down the volume of their own voice or to be quiet.

Also, in this usage, many prefer to change the phrase slightly to add in what needs to be turned down in between the words ‘turn’ and ‘down.’ For example:

TURN DOWN: FOLD DOWN

When talking about folding down a collar on a shirt or jacket or folding down sheets on a bed, we can use the term ‘turn down’ as well. 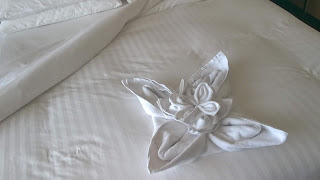 TURN DOWN: GO A PARTICULAR WAY
When giving directions, some may use the phrase ‘turn down,’ as well.

Sample conversation:
Stan: Yesterday I tried to find the library, but couldn’t get there. How do I drive to the library from here?
Andy: It’s easy. Drive down Main Street, then take a right turn down Book Street. After you turn down Book Street, take the first left down Library Street. You can miss this turn because it comes almost immediate after you take the left.
Stan: Oh! That must have been what happened? I found Court Street and took a left turn down that street.
Andy: Oh yes, you turned down the wrong street. Actually, you can still turn down Court Street and then turn into the back parking lot of the Library, but it’s not so easy to find.

Slang alert: In the U.S. in some areas people may say ‘hang a [right/left] down’ instead of ‘turn down.’

Typically, room service will come clean the room or hotel suite, make the bed and tidy up the place in the morning. This service is not called turn down service. Turn down service happens later in the evening, maybe between 4-7pm depending on the hotel. The staff will come into the room when the guests are not in the room, make the bed, fluff the pillows, and fold open the sheets on one side in a diagonal way (opening up the bed, so to speak). They may put chocolate on the pillows, flowers or fruits in the room, give complimentary wine, or turn on soft music. This all varies from hotel to hotel. Some may organize a turn down service as a trademark of their hotel brand. Some hotels may do special honeymoon turndown service with wine, folded towel animals, and more. 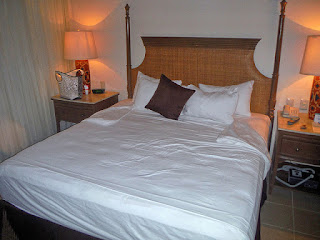 Author, Jennifer Kumar, helps your software teams to communicate better in the U.S. with your American colleagues. Contact us for more information.

Hope you found this post on the meanings of ‘turn down’ useful. Here are some more posts on idioms:
Bite the Bullet
On the Rocks
Buried in Work