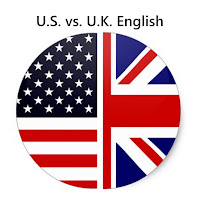 This post will provide an overview of some of the key differences of British (United Kingdom – UK) English and American English. This post will give you guidelines in how to use these two languages, especially in interacting with American clients.

These two Englishes vary in many ways:

1. Spelling
We all know about tire and tyre, color and colour, analyze and analyse. Also, there are words where Americans will double the consonants to make plural, and Britons will not: busses vs. buses, gases vs. gasses.


Resources for learning more about the differences between U.K. and U.S. spelling:
For more tips on spelling differences, see Oxford Dictionaries.
See a list of over 1,000 words at tytso.com.

Do I use American or British spelling with American clients?
There are times British spelling can throw an American off or confuse them. But, for the most part, the rule of thumb is to choose one mode of spelling; either British or American and follow that throughout your emails or documentation.

2. Grammar
Yes, it’s true that some elements of grammar are different between these two versions of English. Recently, I learned about the differences between it’s in American English (it is) and British English (it is AND it has).

Learn more about some of the grammar differences (verbs, prepositions, adjectives, adverbs, tag words and more) at the Cambridge Dictionary site.

Look for the short U.K. / U.S. grammar quiz at the bottom of this page by the British Council.


Which grammar rules do I use with American clients?
I think there is a stereotype in the U.S. about “The Queen’s English,” that it’s “fancier” than American English. I am sure the written forms of the grammar won’t make much difference to change to American English if you are using the British style. More than grammar, I feel Americans may get confused by accent or word choices (words like skip, which means dumpster, in the U.K.).

3. Accent
If you speak with a British accent, this may be admired in the United States. The reason I say “may” is because even in Britain there are many accents. There are some accents that are more easily understood by Americans than others. There are so many accents in the United Kingdom and Britian that even U.K. nationals or Britons who travel to other parts of the country don’t understand each other, let alone Americans!

While there are many videos on YouTube that compare the U.K. and the U.S. accents and even showcase a variety of U.K. or British accents, I hesitate to share them as I am not an expert on U.K. language or culture. However, if you are interested to hear a variety of American accents, see this post.

Should I use a British, American or neutral accent with my U.S. colleagues?
Firstly, I do not endorse faking an accent. And, to me, accent encompasses much more than sounds alone. It also includes word choices, idioms, slangs, and more. What I endorse is trying to plain English, speak at a moderate pace to be understood more clearly and always be open to listening to what the other person says so we can respond accordingly.


Native English speakers or English as Second Language speakers can use the tips here to be understood across global borders.

4. Word Use
While word use and spelling can overlap, here I have put word use as a separate category when it refers to “synonyms” and measurements.

Many of these differences are similar to comparisons of Indian vs. American English as Indian English is heavily influenced by British English.

Here is a list of sentences translated from American English to Indian English.

A common slang phrase Americans like me have heard come from the U.K. is “bloody” or “bloody hell.” I am not sure how bad this word or phrase is, but I surely would not be using it at work! Feel free to share some slang words from the U.S. or the U.K.you would avoid using at work in the comments below. [If reading this British word or phrase offended anyone, I am sorry. I was using it as an example, only.]

In some cases the same idiom can mean two different things between these countries. Here was an example from a real-life global team meeting (idiom is underlined):
U.S. team member: We have one more topic to cover. Should we talk about it today or table it?
U.K. team member: Well if you have a little more time, I could table it.
U.S.::  Huh? I am confused. How can you table it if you want to extend the meeting?
U,K.: “Table it” means to talk about it now
U.S.: Really? Over on this side of the pond, it means to talk about it later!
[They both had a good laugh about this.]

I think an instance of an idiom having a different or completely opposite meaning is rare. I’d like to collect more examples of this. If you have any examples, feel free to list them in the comments section below. Thank you!