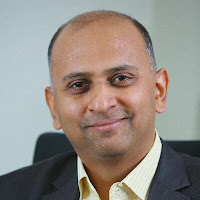 “Sitting in the terminal waiting for my flight to depart from the U.S. back to India, an American lady approached me. After greeting me, she asked me if I was from India. As soon as I said yes, she asked me if I could spare a moment to look at her computer!”

While some Indians may get offended by this stereotype, Mukund Krishna, CEO of Suyati Technologies, an IT Services and Product Company in Infopark, Kochi, welcomes it with open arms. Mukund believes this is a positive stereotype of India, making it easier for him to get business from US clients. Unlike others who may feel Americans don’t think of India as their first IT outsourcing destination, Mukund believes the exact opposite. He has lived in the US for more than 15 years, studying in SUNY Buffalo and then in Indiana University, followed by a decade of working for global companies like Ford and GM. He moved his professional career and life back to India in 2004. Starting Suyati in 2009 with nine employees, he has grown his team to nearly 230 employees with offices in Kerala, India as well as in Illinois, USA.

Communicating Across Cultures – How to Start

Mukund believes that the reputation Indians have in the IT sphere in the US allows for easier relationship building and networking. For example, employees often connect with prospective American clients and team members via LinkedIn. Following this connection, either the US counterpart or the Indian counterpart may initiate a Facebook connect. If this happens, both counterparts may be able to peek into the private lives of each other, learning about their personal life and culture. This allows both sides to learn more about each other’s culture, paving the ground for an easier interaction. Because the counterparts already know or feel they know each other so well, problems like thick Malayalam accents (from the Indian offshore team) and American idioms (used by American clients) may become only a minor hurdle in communication as teams are more open to being patient and listening to each other.


Small Talk – Let the US Counterpart Feel “In Control”
Of course, while American team members may openly talk about divorce and gay marriage (topics that are taboo in Indian culture) on their Facebook pages through discussion and photos, Mukund reminds his team that Americans want to feel in control of releasing their own personal information. Due to this, if the Indian team member has not learned about the US counterpart’s personal or family life via Facebook, they should not initiate these discussions, but instead make small talk about safe topics like weekend plans, the weather, traffic, work related discussions and sports.


How to Bridge the Corporate Cultural Gaps
In addition to understanding and bridging the national culture gaps, Mukund believes that the successful outcome of every project also rests in syncing up corporate cultures. When asked about his thoughts on how the culture of companies that work together in business to business (B2B) relationships impact project lifecycles, Mukund shared:

“Yes, a client’s culture and the company’s culture need to be in sync to ensure that projects proceed to mutual satisfaction of both parties. I guess openness on both sides is a good start. It will enable the trust element to be inculcated into both teams faster. Typically, trust is hard to build right off the bat. It takes time, so being transparent right from the beginning with each other and flexibility on either side (comes from openness) helps to move things along to a point where there is comfort and strong messages can be shared in either direction without inhibitions. Work will get done even when people agree to disagree. That usually is a good sign when we get to this point. Generally, it will be good going thereafter.”


Some Areas US Americans May Misunderstand Indians In Everyday Business
Mukund summarizes by stressing the adaptability of Indian offshore team members. He shares that his employees are invested in cross-cultural understanding and training as they are constantly learning how to adapt to American business concepts of quality control, consistency, handling mistakes and talking about their strengths. While his team has proved their innovation and creativity again and again through tangible outcomes, Mukund believes Indians tend to downplay their strengths, improvements or innovations. In doing so, Americans may not fully understand the value that Indian teams can bring to the table. As Indians learn how to do this, India’s value in the IT outsourcing arena will not only grow, but gain more value.

Suyati’s team was previously featured on the Authentic Journeys’ blog in the post, Selling Americans on Indian IT Solutions.

To get in touch with Mukund Krishna, connect at his website www.mukundkrishna.com or at Suyati’s corporate website, www.suyati.com.

Author, Jennifer Kumar, helps you build your IT and offshore teams cultural and leadership agility when working across cultures. She works with your teams in virtual, live, online instructor led training and/or coaching sessions to help you get, retain and increase clients! Contact her to get started.