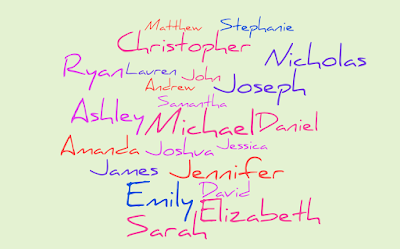 As a part of their client engagement contract, some offshore processes require their employees to adopt an American name. While many may have experienced this with call centers, Authentic Journeys has also worked with Agile software teams who use American names. Whereas the call center customer experience is very short term (maybe only 5 minutes with one person), some Indian professionals working in other processes that require an ongoing relationship with the same person over a number of days or months may also adapt American names. While I understand adapting an American name is a controversial topic, I am not here to share my views on this, but rather pose tips on how to pick and/or use American names in the right cultural context.

Introduce Yourself With a First Name AND a Last Name
In some parts of India, especially, at least, in Kerala, it’s common for people to use only their given name when introducing themselves, even in professional situations. As it was said to me by an Indian who has lived for two decades in the US, “I always know when a customer service agent is from India if he or she introduces him or herself with only a first name. The only people who get away with that in the U.S. are Madonna or Cher!” I found that to be a very apt comparison. While most larger companies like Citibank or JP Morgan avoid this, smaller outfits that do not understand American culture through the American lens would miss this.

Quick Fix:
When answering the phone, the representative should answer with their full name, something like, “Good day, Sir, you have reached XYZ company. I am Holly Merckel. How may I help you today?”

Avoid Using Initials
In South India the cultural naming convention uses initials either before or after the name. Initials stand for the last name/family name/surname.

Some examples would be:

While it may seem fun or flattering to adapt or adopt a name of a famous person, famous movie character or singer, it may impact business as people will associate that name with other things and probably not the work at hand that needs to get done. To put this in perspective, how about in India if a colleague in your office were named Shah Rukh Khan, Narendra Modi, Mamoooty, or Veerapan? Of course, they would get questioned or teased from time to time!

So, that being said, avoid names like Frank Underwood (TV character’s name), Ted Danson (actor), Madonna (even if a last name is used with it!), Donald Trump, or Charles Manson (a murderer!). To illustrate this point, there was an episode of a comedy show called Seinfeld, where Elaine dates a man named Joel Rifkin. As Joel Rifkin is the name of a serial killer, she urges him to change his name because everyone looks at him funny and has a bad impression of him once they hear his name.

Quick Fix
It’s Google to the rescue! Google the name. If the name has a profile of a Hollywood actor or other famous or infamous personality attached to it, chose a different name. If you still aren’t sure, and have American colleagues in the US, ask them. They can tell you right off the bat if a name sounds like a name of a famous person.

How to Pick a Good Name
Again, Google to the rescue! We can type in “common first names in the U.S.” or “common last names in the U.S.” and see what happens. Wikipedia also has some pages listing common first names and also another page listing common surnames. If you don’t know how to pronounce them or want to make sure you are pronouncing a name in an American accent, ask your US counterparts for help.


Use Names Consistently
While using a pseudonym on its own is confusing enough, assure that the name you use with clients is:

Final Words
While the trend is moving away from adapting American names, this practice is still being done in some companies in India. The tips in this article will help you culturally adapt and use the American name in the appropriate, customer friendly way.

Jennifer Kumar, author of this article is the Managing Director of Authentic Journeys helping India-based teams prepare for working with Americans across borders on virtual, distributed and offshore processes. She has worked with over 2,500 Indian professionals in over 40 companies in a wide range of client-facing process. Contact us for more information or to book your program today!