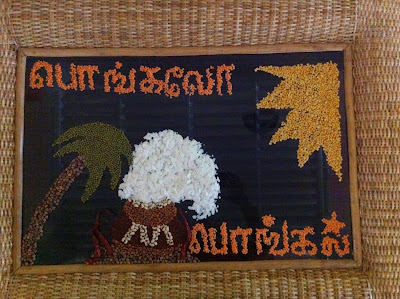 Pongal a four day South Indian Thanksgiving celebrated in mid January on the first day of Tamil calendar month Thai. Rituals and observances of this holiday, in a typical Tamil village include: “spring cleaning” and ridding of all old items through a bonfire, purchase of new items for household use, harvesting of new rice to be cooked over a wood fire, honoring of cows- decorating cows and feeding them some of the thanksgiving feast, visiting relatives and friends, wearing new clothing, drawing large kolums (floor designs) outside their homes, and other regional revelry (bullfights, etc.).

While city folk with relatives in the village may travel village side to partake in festivities with their families, most city folk observe Pongal in a much abbreviated fashion on the day called Thai Pongal. In addition to having a Pongal meal, visiting the temple and relatives, many city folk may watch cultural programs or enjoy the newest film – the much anticipated Pongal release. Living in India, and in Tamil Nadu encourages celebration of Pongal, as it is on the calendar as a living, breathing holiday. But what about the Indian Tamil Hindus living in America? This holiday is definitely not on calendars in America, and celebrating Pongal in America as if in India would not be fully possible. Yet, Pongal is alive and vibrant among Tamils and other groups of Indians in the U.S. So how do people celebrate Pongal in America?


Pongal Among Tamils
Hindu, and for that matter, Indian holidays are celebrated on a flexible schedule in America. Though Pongal may fall on a Wednesday, people may prefer to celebrate on the weekend when they have free time. It is only those in Tamil Nadu who actually get holidays for Pongal. In America, parents are off to work and children, off to school. On Pongal day itself, Hindu temples often hold special prayer sessions and singing of bhajans (religious songs). Occasionally, girls may perform Bhartanatyam song sequence on this day – dances that tell stories of the holiday or cultural epics.

In mid January, Pongal is unique to Tamils in India. Pongal is not the only Hindu celebration in mid January, however. Punjabis in Northwest India celebrate Lohri, Andhrites on the Eastern central coast and landlocked southern Kannada speaking people celebrate Sankranti and some families in Kerala observe Makar Jyoti. Each of these festivals may have some similarities to Pongal, but overall they are different festivals, celebrated for different reasons, and observed in different ways. Because many Hindu temples in America are open to Hindus from across India, it is when so many different Hindu festivals fall at the same time, that the diversity of Hindu culture can be showcased in the temple. It is at these times, the Hindus from different parts of India can learn first hand about the different cultures of India and through intermingling, possibly evolve their own culture integrating different rituals, practices, dressing styles, prayer songs or even food habits.

Tamils outside the temple will have puja in their home, and of course stay at home moms and working wives weave time into their hectic schedules to prepare a grand feast on the Pongal days. Some will have a small family meal, while others invite over friends and family. Tamils also host larger community events through their local Tamil Sangam (Tamil Culture Club) for all to join in and enjoy. At the Tamil Sangam Pongal cultural programs, usually held on Saturday or Sunday afternoons, the Tamil community showcases their talents: acting, singing, dancing, and of course, cooking. The potluck meals are usually catered by community members. In larger cities like Boston, New York City, Dallas or Los Angeles, where a larger number of Tamils live and a South Indian restaurant is available, the event may be catered by a restaurant. One year to encourage participation, the Tamil Sangam in my area sparked the culinary creativity of the women by having a potluck cooking contest. Generally, to attend these events a small fee is charge to compensate for cost of food and hall rental.

Other Indians in America
Where large cities exist, and the Non-Resident Indian (NRI) population is large, it is possible to have a Tamil Sangam and other ‘regional Indian sangams’ like Telugu, Malayalee, Kannada, Marati and many others. However, in smaller communities with less than 1,000 families (a guess), a more pan-Indian approach to celebrating is the norm. Having experienced living in such a community, every January around Pongal, about 150 families would host a ‘Winter Potluck Meet and Greet.’ The purpose of this event was three fold:

Living in a small community has it’s advantages. Because the Indian population was not large enough to split into respective regional groups, there was an opportunity to intermingle and learn about different food habits, dressing habits, regional dances, rituals and traditions of different holidays. It is this small, ethnically diverse community that regional Indian traditions are showcased and communicated in a more personal setting. Visiting each others homes, it is easy to experience what is described in books. It is also interesting to note that certain rituals, such as displaying dolls in sceneries (called golu, similar to Christmas nativity scenes), is common during this season for some from Andhra Prades, but not for Tamils. (Some Tamils will display a golu during Navarathri in September or October.)

Can I wish my Indian Colleagues a Happy Pongal?
If you work with Indians in the US or interact with offshore colleagues or support in India, you may wish them a Happy Pongal. As there are many cultures, states and languages in India, not everyone in India celebrates Pongal. Pongal is popularly celebrated among Tamil people in Tamil Nadu (Chennai) or Tamils living outside Tamil Nadu in various parts of India. In English, we can say ‘Happy Pongal.’ In villages, I have heard people say, ‘Pongal-o-Pongal.’

Incidently, there are other holidays happening in other parts of India during this time that may or may not be similar to Pongal: Lohri in Punjab, Makar Sankranti in Karnataka, Andhra Pradesh, Maharasthra and many other states. It also goes by other names in other states like Poush Sankranti in West Bengal (Calcutta) and Makara Jyothi (the great light that shines from Sabarimala) in Kerala.

Keep in mind that most people in most parts of India will have this day off of work as a holiday. Generally, though, this is not a holiday or day off in Kerala.

Conclusions
The celebration of Pongal in the village, in the city, in India or in America demonstrate the resiliency of the Indian culture and the determination and creativity of the Indian family to carrying on their traditions. Marrying of tradition and modern lifestyles is a spectacle for most Westerners to experience in India, but modernizing an ancient, rustic festival into an ever changing, modern society that is America is commendable. Tamils have proved that the unique experience that is Pongal is not lost outside the village, outside Tamil Nadu and more importantly, outside India. In each setting, the feeling of Pongal exists, though the way it’s communicated through celebration may be slightly different. This evolution allows for improvisation bringing unique angles and modern touches to an ancient celebration.

View photos of the blog author’s Pongal celebrations in the US and India (Kerala and Tamil Nadu) through the years below. (Click here to view photos on Flickr.)

Related Posts:
What is Pongal?
What is an NRI and other Indian Expat Phrases?