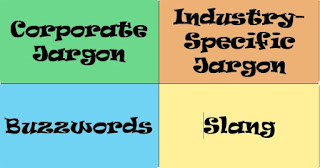 There is a lot of confusion between slang, buzzwords, corporate jargon and industry specific jargon. Let’s take a look at each of these categories of terms for a clearer understanding.

Slang are vocabulary words or phrases that are used within particular groups or in particular decades, age groups or time periods. By the type of slang others use, we can tell where they are from, what line of work they are in, maybe what company they work for or even their age! Let’s see how this works by reviewing the other categories of words, returning to slang at the end of this post.


What is the difference between corporate jargon and industry specific jargon?

Terms we use within our company are called corporate jargon. We can freely use these jargon with others on our team, but when we move to other teams we have to be careful because some jargon are particular to teams.

Jargon include words, phrases, and the dreaded acronyms. Avoid the alphabet soup of acronyms by clarifying the meanings or expansions of the acronyms when using them with colleagues not on your team or in your company, including your clients.

So, based on the industry-specific jargon we can tell what line of work someone is in and by the use of corporate jargon, we may be able to tell which company they work for.

What are buzzwords?
The next layer of words are called buzzwords. Buzzwords may be based from an industry or a company, but have made it into the mainstream population. For instance ‘ping’ is one such word. Many may say ‘ping me later’ which means to get in touch. The word ping comes from the information technology (or IT) field. Pinging happens when two electronic gadgets try to communicate with each other. Other popular places to find buzzwords are on Facebook or Twitter. Social media has coined many buzzwords like trending, hashtag, friends, unfriend, tag me, among others.

How about slang, again?
To end this article where we began it, let’s discuss slang. Slang words and phrases can be classified as idioms, but not all the time. While idioms typically have a wider use in the general population among many ages and groups of people, slang tends to be more targeted to an area or an age group. In some ways you can call corporate specific jargon slang because these words or phrases are useful only within a particular group of people. The reason industry specific jargon is not slang is because industry specific jargon has a longer shelf life (or span of use) than slang. Slang tends to change from month to month, season to season or year to year within the same group. Often many think of slang as the language of the teenagers. That’s why as people get older they lose touch with slang. Older people may not think of slang as proper language. Older people may not understand what is being said when younger people use slang because slang changes so quickly and often the meaning of words when used as slang is totally opposite to the actual meaning (especially for words that do exist in the dictionary). For example, “wicked” in some circles means really great or awesome or spectacular. These are slang meanings because the actual dictionary meaning means evil or sinister. As slang, someone would want to have something wicked, but when used as a normal word, no one would want something wicked.

Some examples of time-bound slang in the U.S. include:

While anyone can use slang from any generation, often as people get older, they find it harder to keep up with the language of slang, and hence stick to the slang of their generation, hence dating themselves. So, sometimes by the way people use slang, we can guess their age if we know the generation their slang originated in.

In this post we have discussed some similarities and differences between slang, buzzwords, corporate jargon and industry jargon. Feel free to share your insights on this topic in the comments section below.

Jennifer Kumar, author of this post, facilitates training on Business English and cultural use of English for English as Second Language speakers in corporate and cross-cultural business environments. Whether you’re an expat in the US or working on a virtual team, we can help you, contact us today.

Copyright Authentic Journeys. Do not reprint in entirety. Refer to this article with up to not more than 3 sentences with a link back to this blog. This blog can be shared on your blog with a link without a quote as well. Get in touch with us to do a link share.