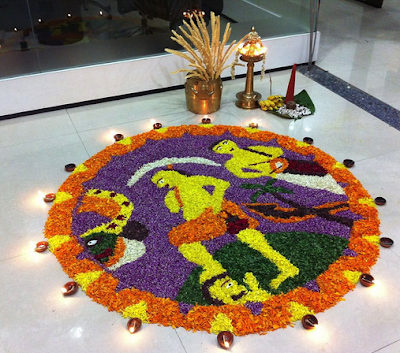 What is the Story of Onam (Onakatha)?

Onam is the most widely-celebrated holiday in all of Kerala, India. Have you ever heard about the story of Onam – Onakatha?

These flower designs or flower carpets can be comprised of pretty and colorful designs, while others also depict stories. The pookkalam pictured here tells the story of Onam.

The story of Onam shared below was written by my father-in-law, Narayanankutty Kartha.

The Story of Onam

Once upon a time an asura (demon) king – Mahabali – used to rule Kerala. In that time everybody lived in peace, everything was in plenty, no one indulged in wrong doings, telling lies or betraying one another. All the people were happy about his rule and thus the king’s popularity grew to such a proportion that the Gods were shaken and even thought at this rate one day people will ignore Gods and thus they will no more be worshipped or liked by the people. Therefore a delegation of Gods approached Vishnu to save them from this growing ignominy. Vishnu then took the avtar of a Vamana, Brahmin Bikshu and approached Mahabali for alms. Mahabali was known for his habit of giving alms to Brahmins and never to say ‘no’ to anyone who approached him for alms. Mahabali when approached by Vamana (Vishnu in disguise) readily agreed and asked what he would need. To this the Brahmin said that he has no place to live and needed only ‘three steps of land’ (moonu adi mannu). Mahabali gave him the alms and asked him to measure the land wherever he pleases. (For Onam, people are nominated to dress up like the King for the festivities. Mahabali, pictured to the right, is also known as Maveli.)

Once this happened, the Brahmin, thus far too short in height, grew in size and into colossal height and his first step covered the whole land, the second the sky and he was looking at the king asking where to put the third step. The King Mahabali, realizing that the Brahmin is no ordinary person but Vishnu himself, and had tricked him into this, bowed before him and requested to use his head to put his third step, realizing that otherwise his third step will make the universe disappear. It was so done by the Brahmin (Vishnu in disguise) and Mahabali was pushed down by his third step into the ‘pathalam’ the nether world.

Mahabali, however, had requested the Brahmin (Vishnu) to allow him to come to the land once a year to meet his people and see and join in their happiness. The request was granted and this was the day –ONAM – when Mahabali came to earth to watch his people rejoicing and happy.

In their homes, with their families, Keralites and Malayalees all over the world welcome King Maveli into their home by creating pookkalams (flower carpets), like the one below. In addition to this, everyone partakes in a savory 26-course meal served on a banana leaf! 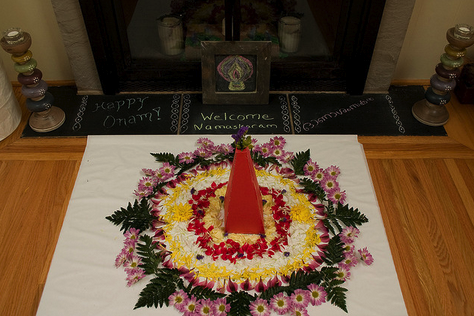 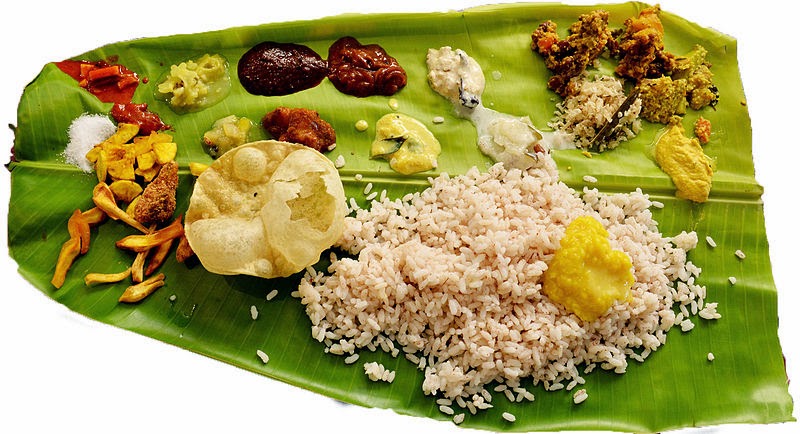 Another interesting thing I learned recently is that just like how Santa gets cookies and milk, Maveli is given a full sadya! For Onam, families may fix a banana leaf and leave it for Maveli to welcome him to their house.

I enjoy celebrating Onam with my family in India as well as at work with my colleagues and clients. I am grateful to experience other cultures and of course, eat Onasadya!