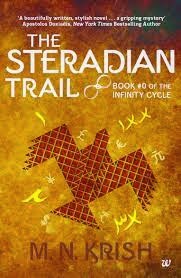 Not Your Typical Foreigner in India Novel!

If you are looking for a gripping novel featuring a foreigner experiencing India, a thrilling pageturner that reads fast and keeps you hooked till the end, look no further than The Steradian Trail: Book #0 of the Infinity Cycle by MN Krish.

Over the years, many have presented me books and novels where the main character, a foreigner, visits India. I am sorry to say that most of those really didn’t speak to me. Within a few pages, I discarded those books. They were just too irritating. To be sold in a foreign market, those books had to feature so many stereotypical symbols of India that really have nothing to do with the lives of Indians living their life in modern India. This book, however, is refreshingly different, and portrays in the best way it can, the life of real Indians living in India. It just so happens a foreigner is in their life at the time, and not the other way around!

It’s even more amazing that this is the case, since the main character is indeed an American in India! As the book opens, and Joshua is preparing to leave India, he is immediately identified at the airport and ‘forced’ to stay in India for an indefinite time period due to a mysterious death of someone known to him in the US. Uncharacteristic to the typical foreigner in India books, this foreigner has a long history of traveling to India, staying in India, and has many local contacts and a few close local friends. This allows the reader to get a more balanced perspective of India through a foreigner’s eye. This means that while Joshua is trapped in India, uncovering many mysteries along the way, the typical stereotypes of India found in other books simply aren’t found here or are showcased in such a way to make it a very ordinary part of life, rather than divorced from it.

While many other reviewers of this book do not mention the characters, to me, the characters really make this story worth the read. As the author is born and raised in the city where this story predominantly takes place, this only provides authenticity and a depth to the characters that may not be always possible for foreigner writers of Indian-themed novels.

The realistically portrayed characters also give readers foreign to India a glimpse into the lives of real Indians. The characters are not created superficially or for dramatic effect. The characters aren’t the “mysterious Indians living in India” but authentic Indians living in modern day India trying to balance their modern lifestyles with the traditions that define their culture. While the foreign reader can relate to average Indians through the story, the average Indian, the average Madrasi or the average Tamilian can certainly pick up a book where he or she can actually relate to characters – people who are like them, written by a person who really understands the culture.

Experiencing and exposing the cross-cultural challenges of India is a common theme of many novels based in India featuring a foreigner. While the cross-cultural element, sometimes subtle, sometimes obvious, is sprinkled throughout the book, the story neither focuses on culture shock or culture superiority. It is an original, idea-driven mystery that beautifully unravels connections between culture and science and technology and crime. That is precisely what makes this book so endearing.

The Steradian Trail: Book #0 of the Infinity Cycle can be purchased on Kindle by clicking here.