The seventh tip in a series of Tips on How to Broach Delicate Topics is to:
Use a coach or trainer that is the same gender whenever possible.

Though a majority topics can relate to both sexes – in some contexts and cultures men will receive the coaching better from a man, while women will be more receptive if it is given by a woman.

Examples:
Public Toilet Etiquette
As a woman, it’s quite impossible for me to train men on public toilet etiquette, while guiding a woman through this will be easier. It will still be uncomfortable, but easier. In fact, recently I had the opportunity to coach a few women coming to the USA on this very topic; and felt it was much easier and better received when because women relate to women easier when it comes to these issues. We conducted the conversation through comparing and contrasting, mixed with light humor. Now I am also ready to visit their country and know what to expect – not only when entering public restrooms, but bathrooms in homes. (There are also related issues to toilet etiquette; like the use of sanitary products that just don’t relate to men.)

How to Wear a Sari (aka Gender appropriate clothing)
Though it may be appropriate for a trainer to teach ‘Western professional dressing’ etiquette to a mixed gender crowd, there are certain kinds of clothing that are better left to be taught within the same gender that normally wears them. The sari, the national dress of India, is one such example. How I thanked my Indian girl friends when I lived in India for taking me aside and teaching me the proper etiquette in wearing and walking in a sari. These girls had put aside the discomfort they felt while helping me to learn a valuable skill I needed for almost daily life in India. In such a case, a man could not have taught this. 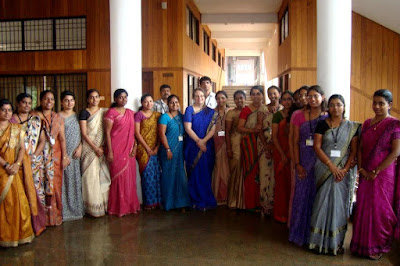 AIDS Awareness
Though AIDS Awareness is now more or less public knowledge shared between sexes in many countries, the nitty-gritty details of how it is transmitted and how to protect yourself is a message that may be better received if done by the same gender teacher, doctor, or coach. In the late 1990s, I was part of a three person team in a slum in India to impart knowledge on AIDS awareness. In my team were three people, one man, one woman and myself. I did not do a lot of talking as I did not know the local language, so I was a coordinator of schedules and creating visual aids. But I always wondered why when we went to the field to do the door-to-door campaign, our male companion went alone. I learned later that in this village it was taboo for a woman to discuss sexual matters with a man, or a man to discuss sexual issues with a woman even if it was in the name of education and public health. So, instead of going door-to-door with the actual AIDS awareness campaign, we went door to door to mobilize the women’s support group (the men’s support group was arranged by our male classmate). When the women’s or men’s support group met, is when the respective male or female classmate would deliver the program. There were many taboos we had to overcome to give this training, but in the end the message was given to half of that village.

As in the above example, there are simply some cultures that will not accept messages from the opposing gender. If a sensitive issue has to be broached, learn about your audience before advancing with your plans.

If delivering the message as an individual coaching session or class setting is not appropriate, consider writing up the etiquette tips and offering them as a complimentary handout to some related topics being discussed in other parts of the meeting.

Thank you for reading this cross-cultural teaching tip.