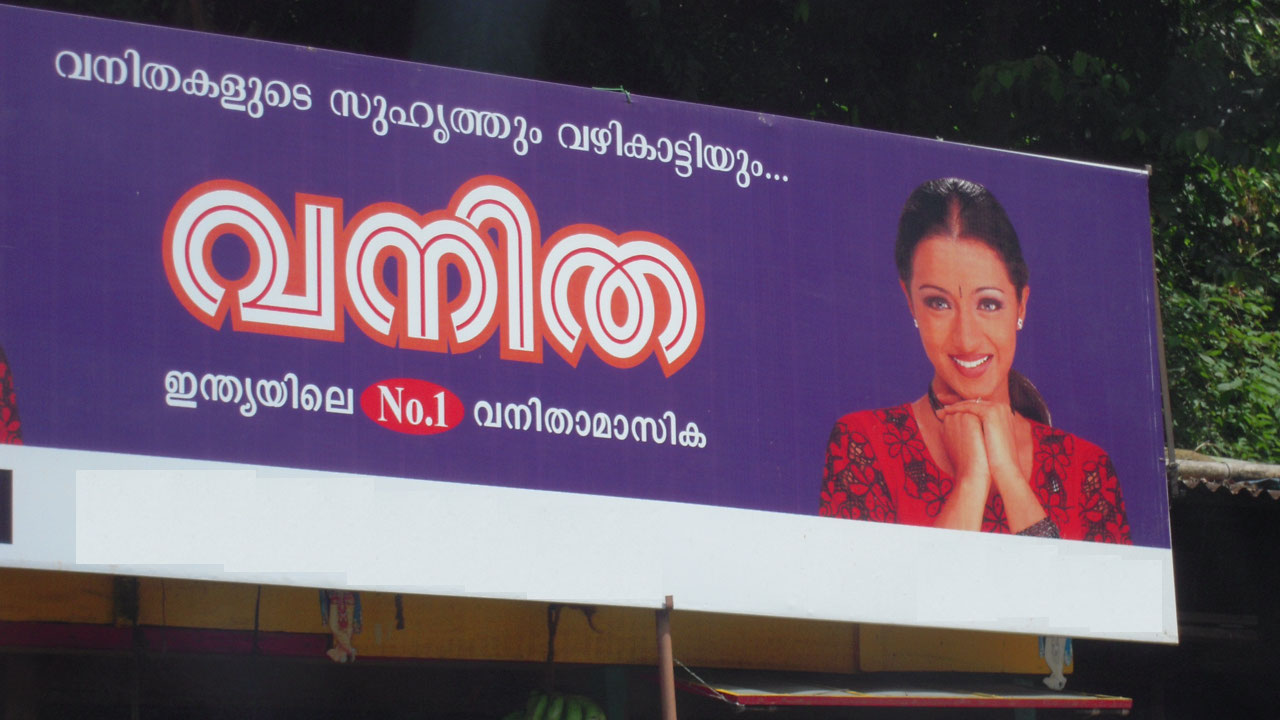 English translation the article that appeared in the Malayalam magazine, Vanitha in 2013.
Read the Malayalam version here at the end of this page.

Jennifer currently runs an establishment named ‘Authentic Journeys’ at InfoPark, Ernakulam where she imparts valuable information as well as training to her Indian clients on American culture, language and etiquette. However, Jennifer’s encounter with Onam happened way before she got acquainted with ‘the Queen of the Arabian Sea’ (Kochi).

“My family migrated from Hungary to the United States,” says Jennifer. “I was born and raised in the US, I came to know about Madras Christian College, Chennai through my Indian friends in the US and decided to enroll for MSW course there.There were many students from various other countries along with me at that college”.


“I experienced Onam first hand during my college days there. My Malayali classmates made preparations for Onam at the campus during the month of Chingam (August- September). Observing my curiosity about the festival, they invited me to participate in the celebrations and floral arrangements”.

“A friend adorned in a Kerala sari and jasmine flowers in her hair narrated to me the story of Onam. This is the day King Mahabali came once a year to visit his subjects. At the feast I was amazed by the variety of food displayed. Being a person who is used to eating Pasta or Macaroni, the huge spread appeared extremely fascinating and quite perplexing. I knew my friends were enjoying my predicament”.


“’Thanksgiving’ in the US that is observed during the last week of November is similar to Onam. All family members gather for dinner that day. However the menu will be mostly non-vegetarian, roast turkey being the main dish.” Jennifer added.

While celebrating my first Onam with all its splendor, I’ve never, even in my wildest dreams, thought that I would marry a Malayali in the future. It is truly an exceptional experience to celebrate Onam in ‘the land of Onam’.

“After finishing my Masters from Chennai, I went back to the US and started working as a social worker. It was during those days that I became acquainted with Krishna Kumar through my Indian friends. The friendship matured into love. I didn’t hesitate at all in accepting an Indian as my life partner, after all I have started thinking of India as my second home during my days in Chennai.  We were married in the US following the traditional Hindu rites and I became Jennifer Kumar. I have learned how to cook Kerala cuisine and began to learn more about Kerala.”

IN THE LAND OF ONAM
“Following our marriage, we lived in the US for a few years.  During those days we used to take part in the celebrations organized by the Malayali Association there. To be honest,  I enjoyed the festivities there more than here in Kerala.  It was fun wearing Kerala Saris, making floral arrangements, taking part in cultural activities and feasts.  Every Onam there was indeed memorable.”

“Being  a vegetarian, I have a special liking for feasts with spicy food – Puliyinji used to be my favorite dish.  I learned how to make Rasam, Sambar and other dishes, but really do not know the names of many items.  I would love to learn how to make all Kerala dishes. Preparing Kerala dishes is time consuming, in the US we generally consume ready to cook foods; even fruits and vegetables are cut and cleaned and packed ready for consumption.”

“The most exciting experience to me about Onam is making the floral arrangements. Every year I try and make different floral arrangements –it is a fusion of Kerala and American styles, pretty much similar to my life. It usually has some art decor from Kerala along with an American cartoon character.”

It’s my desire to own a business that prompted me to start ‘Authentic Journeys’.  When my husband Krishna Kumar got a job as Manager in an establishment in InfoPark, we moved to Kerala  and started a new life here.  Though a native of Mattancherry,  KrIshna Kumar grew up in Delhi. Living in Kochi is a new experience for both of us. I used to work from home, it hasn’t been long since I moved to InfoPark”.

I was born in a place called Rochester in the US – a small town away from the bustles of the city, there were not many houses in the area either. I am fascinated by the fast paced life in Kochi. Even though there are many busy cities in the US, compared to the small town where I come from, Kochi is indeed a big city.

There is an element of awe in the eyes of Malayalis when they see me in settumundu or sari.  While I was studying in Chennai, wearing sari was mandatory, that is how I learned the art of wearing saris. I like both saris and Western outfits. My Malayali friends are surprised when I say that wearing a sari is comfortable. However, I am still considered a ‘foreign lady’ even by the people who see me on a regular basis.  Maybe, I’ll have to deal with this attitude of them as long as I stay here. I dream of a day when they realize that this land is as much mine as it is theirs. ~END~

This article is originally written in Malayalam, appearing in Vanitha Magazine in September 2013. The translation of the article into English was done by BN Kartha and Anjana Warren. To see the Malayalam version, click on the images below. 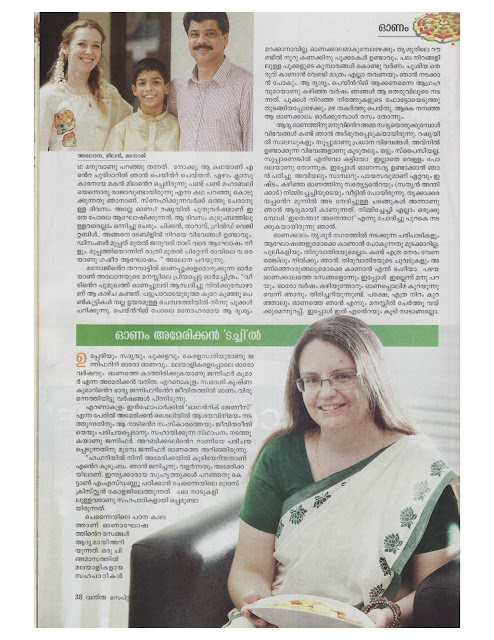 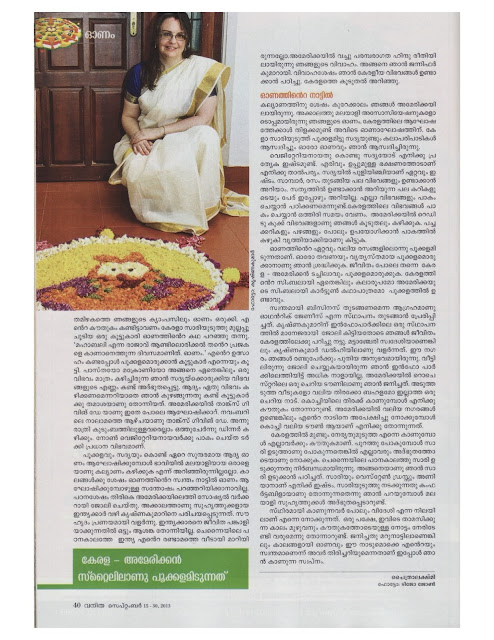 More about Onam celebrations Jennifer had attended in Kochi:
Onam at GeoInfopark
Onam in Infopark

Read more articles about Jennifer in Kerala newspapers or magazines:

This interview narration highlights the story of Jennifer Kumar a foreigner
and expat from the US living in Kochi, married to a Keralite.