Not Your Typical “Desi Tourism”

The myth of the low-spending “Desi tourist” is broken. No longer are Desis traveling on shoestring budgets or for the sole reason of visiting relatives abroad.

When I am asked as an American what do I like best about India, one of the things I have noticed especially in Kerala is that a typical middle-class, well-educated family is well-aware of the world, global cultures, speaks multiple languages and has children that by the age of 17 have traveled to two to five countries. I would venture to say this is a ‘better global travel’ record than a typical American child in the same economic and educational bracket. There are many reasons for this, but I’d like to focus this article on the Desi (meaning Indians from India) side of the equation.

The Hindu Newspaper recently ran an article entitled “The New Desi Globetrotter” which throws much light into this topic. A few interesting insights include:

Destinations
Here is a list of preferred destinations mentioned in the article: 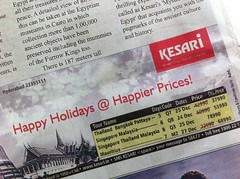 Though it’s not new for Desis to pack suitcases to visit their families who live in every nook and cranny of the world, it’s only in the last decade or so that more Indians have opted for more personal trips to places their NRI relatives don’t live. When asking a few people in Kochi where they want to travel; a typical person in this bracket mentions with reckless abandon places like Singapore, Thailand, Japan, Spain (maybe due to the recent trend in shooting Indian films there), France, and the always popular honeymoon destination – Switzerland. One of the main reasons for this is as India continues to develop; travel within the country is not always easy and may not give the ‘exotic feel’ of far away or even the many nearby countries in the Middle East, South and South East Asia.

Images in this article are taken by the author, Jennifer Kumar. The first image is of a newspaper ad featuring trips to Singapore, Malaysia, Thailand and Mauritius. The second image is of a world map as displayed on an Etihad flight from New York City to Abu Dhabi (UAE).

Author Jennifer Kumar is an American living in India helping resolve cross-cultural concerns between Indians and Americans to promote friendship and good working relationships. Find her on Facebook.


Related Posts:
Get Ready for Short Term Business Trips to the USA
Building Success Coaching for Expats in the USA